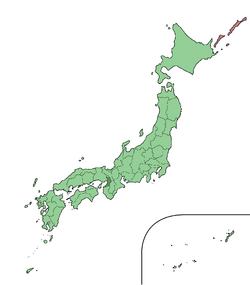 Osaka Prefecture (大阪府, Osaka-fu?) is a Japanese prefecture located in the south-west of Tokyo, on Honshu (本州), Japan's main island. Quite a few Japanese prefectures have names that coincide with their capital city; the capital of Osaka Prefecture is Osaka City (大阪市), and it is one of the three majore Japanese cities, along with Tokyo and Kyoto. Osaka Prefecture is located in the heart of Kansai, also known as Kinki Region. It shares its borders with Hyogo, Kyoto, Nara, and Wakayama Prefectures. It is home to two designated cities, which are Osaka and Sakai City respectively.

Osaka proudly boasts being the first seat of Japanese Imperial Government. Osaka is often refered to as "Naniwa," which refers to that historic time. It has traditionally been referred to as the "nation's kitchen" , or the mecca of gourmet food. Another name given to Osaka is "食い倒れの街" (kuidaore no machi), or "the place where you eat 'till you drop."

Osaka is also famous for many Japanese personages, including, but not limited to Momofuku Ando (安藤百福), creator of Instant Ramen, Osamu Tezuka (手塚治虫), famed manga artist and animator, and historic novelist Shiba Ryotaro

The following is the list of cities, towns and villages (市町村) in Osaka Prefecture. Please help provide information to other JETs by writing about your city, town or village.

Osaka Prefecture is home to many castles, shrines, etc. and along with Kyoto, rivals Tokyo in the depth and breadth of these locations.

Osaka Castle Park is within Osaka City. The castle of Toyotomi Hideyoshi is in the center of the park which is an excellent (and popular) place to see the cherry blossoms in spring.

Another major district in Osaka City is Den Den Town, an electronics district similar to, but smaller than Tokyo's Akihabara. For JETs in Kansai it is an extremely good place to buy Japanese electronics like cameras.

Hirakata is best known for being the location of Kansai Foreign Language University (関西外国語大学, Kansai Gaikokugo Daigaku?), most popularly called Kansai Gaidai, which is the university of many Japanese students studying English and other languages and around 500 international students studying Japanese.

Izumisano is located in Osaka Prefecture, about 30 minutes south of Namba station on the Nankai line. It is home to the ANA Gate Tower hotel, the tallest building in the region. It is located directly across the bridge from Kansai International Airport. You can access Izumisano via either the Nankai or JR Lines. It is also the current home of prolific Osaka area blog writer AETF.

If you get lost on any of these trains just ask the nearest Oba-san for some directions. Who knows you may get an acid-laced onigiri for your trouble. Those Oba-san really freak me out

Nan-DEyanen! Osaka is known for its seasoned accent all over Japan. The Japanese used in Osaka varies not only in vocabulary, but also in grammar, which derives greatly from older, classical Japanese. Instead of the casual copula "da," for example, Osakans prefer to use the word "ya" at the end of casual sentences. Another notable difference in vocabulary is the useage of the state-of-being verb "oru," as opposed to the standard Japanese "iru" to describes one's state of being. (i.e, am, is, are) To ask "Where are you?" (どこにいる？doko ni iru?), an Osakan is most likely to ask "どこにおる?"(doko ni oru?).

Perhaps the most notable thing in Osaka dialect is the usage of the casual negative "-hen" as opposed to "'nai." Study the following verbs:

Another thing Osakans do is add n's at the end of casual verbs. Observe:

To be emphatic, Osakans like to add "nen" at the end of sentences, very similar to the Standard Japanese "nan," as in "sou nan desu," but slightly different. You'll often hear Osakans say "sore de eenen." (That'll be fine.) Or "seyanen!" (souda!): That's right! But probably the most famous word out of Osaka is the emphatic "nanDEyanen!!!" It can be playful among friends, but don't use it with people you don't know, as it is roughly equivalent to the American English expression "what the (insert your favorite 4 letter word here)."

Use the controls on the left to scroll and zoom around the map below.

Community content is available under CC-BY-SA unless otherwise noted.
Advertisement