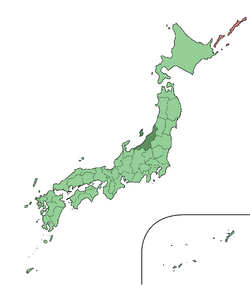 Niigata Prefecture (新潟県, Niigata-ken?) is located on the north coast of Honshu. Although it is technically part of the Chubu region, Niigata is often integrated with the Tohoku region, such as in public transportation routes in the north. It is in AJET Bloc 2 and is currently home to 102 JETs.

The following is a list of places in Niigata Prefecture where JETs are placed. Niigata AJET separates the towns into 6 different blocks.

If your home town is not listed, please edit this section and add it to the list!

If your home town shows up as a red link, then the article does not yet exist. To create it, type the town name in the box and click "Create article".

The charity work in Niigata used to be processed through the Niigata International Charity Organization (NICO), but it has been disbanded. As of 2012, charity and community service has operated through Niigata AJET.

The largest charity program in AJET. The musical typically features an original show with ALTs and CIRs as cast and crew members. In 2017, they had 7 shows: Niigata City, Kariwa, Joetsu, Arakawa, Gosen, Tokamachi and Sado.

The first Skills Auction was held in the fall of 2013 in Niigata City. It was featured as a Bloc 2-wide event.

Retrieved from "https://jet.fandom.com/wiki/Niigata_Prefecture?oldid=14865"
Community content is available under CC-BY-SA unless otherwise noted.