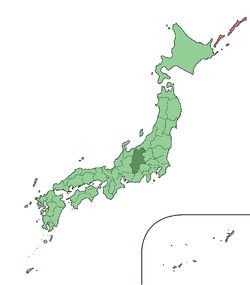 Nagano Prefecture (長野県, Nagano-ken?) is located in the centre of Honshu island. One of the only land-locked prefectures in Japan, Nagano nonetheless is home to many beautiful lakes and rivers, hiking trails, mountains, and outdoor onsens. Ample ski and snowboarding opportunities make this prefecture one of the most requested placements in Japan, though there's still plenty to do outside of winter sports.

The Shinkansen (bullet train) network connects Nagano City, and the eastern part of the prefecture with Tokyo as well as the Hokuriku area. There are limited express trains that connect Nagano and Matsumoto to Nagoya, Tokyo, and a few surrounding prefectures. Nagano also has local sightseeing trains: Rokumon and HIGH RAIL 1375.

Nagano is one of the largest blocks in the JET programme, with just under 80 JETs for the 2021-2022 year, along with a comparable number of other ALTs . It takes over four hours to drive from the southernmost to the northernmost towns in the prefecture. Nagano is also very mountainous, meaning some road and rail networks are, to some extent, constricted to the prefecture's numerous valleys or through tunnels.

Because the population and landscape is spread over a large area, Nagano implements a block system, wherein senior JETs in assist the JET Prefectural Advisors (JET PAs) to welcome the newcomers, present at meetings, provide area-specific information, and organize a yearly prefecture-wide event in their own block called NagaYes. Currently, there are five blocks, divided along geographical and acessibility lines: Hokushin East and Hokushin West (north), Chushin (central/west), Toshin (east), and Nanshin (south).

Another organisation that facilitates social networks is Nagano AJET, a branch of the National Association for Japan Exchange and Teaching (NAJET), is a volunteer group made of mainly JETs but are separate from the JET PAs. Nagano AJET holds regular events around the prefecture to bring people together and socialise. Their "Holiday Dinner" in October/November is the biggest event in the year in terms of attendees, and they hold a charity auction during this time. They also host a number of other popular cultural, and seasonal, events across the year. Nagano AJET runs a Facebook group that caters towards JETs in Nagano, although a number of former JETs and other international residents are also included. It is considered one of the best ways to connect socially with other JETs and residents in addition to preparing for your arrival as members regularly give away or sell furniture, appliances, and other items.

The following is a list of places in Nagano Prefecture where JETs may be placed (updated for the 2021-22 year).

Community content is available under CC-BY-SA unless otherwise noted.
Advertisement