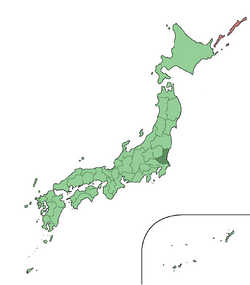 Ibaraki prefecture is in the Northeastern part of the Kanto region on Honshu Island. Tokyo is around 120 km from Mito, the capital city. The most iconic attraction in Mito is the Art Tower. This geometric, spiraling building marks the skyline. From the heights of the tower, you can view the acclaimed Kairakuen Park, one of the three great gardens of Japan.

Kairakuen Park has more than three thousand plum trees of a hundred varieties. Many visitors are drawn, cameras in hand, to the shower of pink and white petals. A plum festival is held there every year from mid-February to the end of March.

The Ibaraki mascot is a cartoon version of Mito Komon. Mito Komon or Tokugawa Mitsukuni was the 2nd Daimyo of Mito. This beloved historical figure has inspired a popular television show of the same name. In his honor, the city has a Mito Komon festival with a parade, dancers and other entertainment. The actors from the television show make an appearance.

Trying your hand at pottery in Kasama, a city renowned for its earthenware, is a great way to get involved in the local arts. Numerous shops offer pottery classes and beautiful, handmade crafts for sale. If you go from October to November, you can catch the Chrysanthemum festival. Giant Chrysanthemum flowers surround Japan’s third largest Inari shrine. Inari shrines pay homage to foxes, the messengers of the Shinto gods.

Southern Ibaraki also hosts many attractions. Lake Kasumigaura is the second largest lake in Japan. Take a day excursion out on the waterfront. Ushiku city has, at 120 meters, Japan’s tallest standing Buddha. Many people still mistakenly claim that it is the tallest Buddha in the world – so don’t be fooled. An elevator will take you up to the top viewing area. You can view the countryside below from the point of view of a giant, bronze Buddha.

Tsukuba city in Southern Ibaraki is internationally and technologically oriented with its reputable Tsukuba University, Japan Aerospace Exploration Agency (JAXA) and other various research institutes. Overlooking the city is Mount Tsukuba. The twin peaks of Tsukuba, said to be husband and wife, are the mythological origin of Japan. Unlike barren Mt. Fuji, Mt. Tsukuba is full of life – green cypress trees and red pines. Some people, again, might claim that this is the second tallest mountain in Japan. Don’t be fooled. If you climb the mountain, you can stop and have lunch in a revolving ramen restaurant nestled between the two peaks.

A toad-shaped shrine in Tsukuba guards the forested mountains. Every year in August, the shrine has a toad festival. Come honor the toads who were sacrificed when it was believed that toad grease protected one against sword wounds. There’s plenty of sake and fireworks.

While traveling or living in Ibaraki, make sure to try some of the local specialties, the most famous (or infamous) being natto or fermented soybeans. This pungent, stringy dish isn’t for everyone so other specialties include melon, Hitachi beef and Hitachi Aki Soba (green soba).

If you feel like traveling outside the Ibaraki region, the Ibaraki Airport opened recently in Omitama city. It has limited flights to Kobe, Seoul and Shanghai.

Parts of Ibaraki were devastated during the Tohoku earthquake on March 11th 2011. People here are still trying to rebuild their houses, their communities and, most importantly, their lives. Donations and support are always appreciated.

Ibaraki Prefecture (茨城県, Ibaraki-ken?) is located on the eastern coast of Honshu island.

The following is a list of places in Ibaraki Prefecture where JETs are placed.

Community content is available under CC-BY-SA unless otherwise noted.