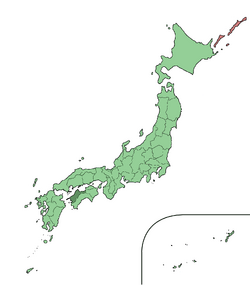 Ehime Prefecture (愛媛県, Ehime-ken?) (pronounced /eh he may) is on the north-western side of Shikoku, the smallest of the four main islands. While Ehime is largely a rural prefecture, it boasts the largest city on Shikoku, Matsuyama (over 500 000 people), and is also home to some of Japans cultural treasures, including Matsuyama Castle, Dogo Hot Spa and Oyamazumi Shrine. The “love princess” (the Japanese translation of Ehime) truly is a hidden treasure – a place where natural beauty and industry meet.

Ehime is full of great things to see and do - particularly if you want to get out and enjoy the scenery!

The JET Programme in EhimeEdit

In 2008-2009, the number of JETs in Ehime totalled 94 - 7 CIRs, 13 Senior High School ALTs, 1 Elementary School ALT, and 73 Junior High/Elementary ALTs. They are spread throughout the prefecture, from the islands off of Imabari right down to the bottom of Ehime.

The following is a list of cities/towns in Ehime Prefecture where JETs are placed.

Did you know that...

Japan is a very weather oriented country, with fashion, food and festivals greatly influenced by the coming and going of the seasons. In Ehime, the temperatures can vary greatly depending on what region you live in, but here’s a general guide….

Summer is hot, humid and sticky. Air conditioning is not often found in classrooms, but it’s in offices (and hopefully your apartment). Temperatures can get up to the mid-thirties.

Autumn is beautiful. The air is crisp, but not too cool. The maple leaves are changing colour and the fall festivals are abundant. Unfortunately, fall also means typhoon season which means it rains, a lot. When the rain stops, the cool weather starts to settle in.

Winter in Ehime is mild in comparison to other regions. Generally, there is very little snow - although there are some mountain areas that do get a lot of snow! Be warned, schools may not have heat in the classrooms and your apartment may have a space heater, but not central heating.

Spring is full of flowers, cherry blossoms and (again!) rain. The weather starts to warm up, and the rains come down. Days alternate between beautiful sunshine and down pours. But this is not rainy season – yet!

Rainy season is late spring, early summer (the Japanese will tell you they have five seasons). It rains – a lot! All day, for days on end! For those of you from dry places (like Australia) – expect to get wet. A lot!

Ehime is serviced by Matsuyama Airport. Domestic flights to just about anywhere, and international flights to Korea and China. Catch bus number 52 from Okaido, Matsuyama City Station or JR Station. In addition to the #52 bus, you can take the blue limousine buses, they’re frequent and cheaper.

Getting in and out of EhimeEdit

Ehime is connected to Honshu via Japan Railways (JR). Trains from Okayama go through Takamatsu, and hit most of the major cities in Ehime. From Okayama to Matsuyama, it takes about 2hrs40mins and costs about 6600yen.

All of the major cities are on the express train line connecting to Matsuyama.

The train is generally more expensive for trips out of Shikoku. Tokkyuu (express) tickets can be purchased from vending machines or at the ticket window of any large train station. Note that you will need two tickets, a 乗車券 joushaken and a 特急券 tokkyuuken to board express trains. There are also two types of tickets, reserved (指定席) and non-reserved (自由席). Each car is labeled with the appropriate kanji, so be sure to check when you get on the train. The Shinkansen works more or less the same way. The train can offer you a smoother ride and save you from having to reserve a ticket. You can sometimes get a Shikoku schedule for free by asking at the Matsuyama station ticket window. The word for schedule in Japanese is jikokukyou (時刻表) and once you learn the kanji for place names they are not hard to use.

If you will be traveling frequently inside Shikoku, you can save money by getting a ***Young Weekend Card***. It costs ¥1000, and grants a 40% discount on round trip train fares, providing you both leave and return on a weekend or holiday, and that the trip is no longer than six days long. You can buy one at major train stations in Shikoku.

Retrieved from "https://jet.fandom.com/wiki/Ehime_Prefecture?oldid=13526"
Community content is available under CC-BY-SA unless otherwise noted.